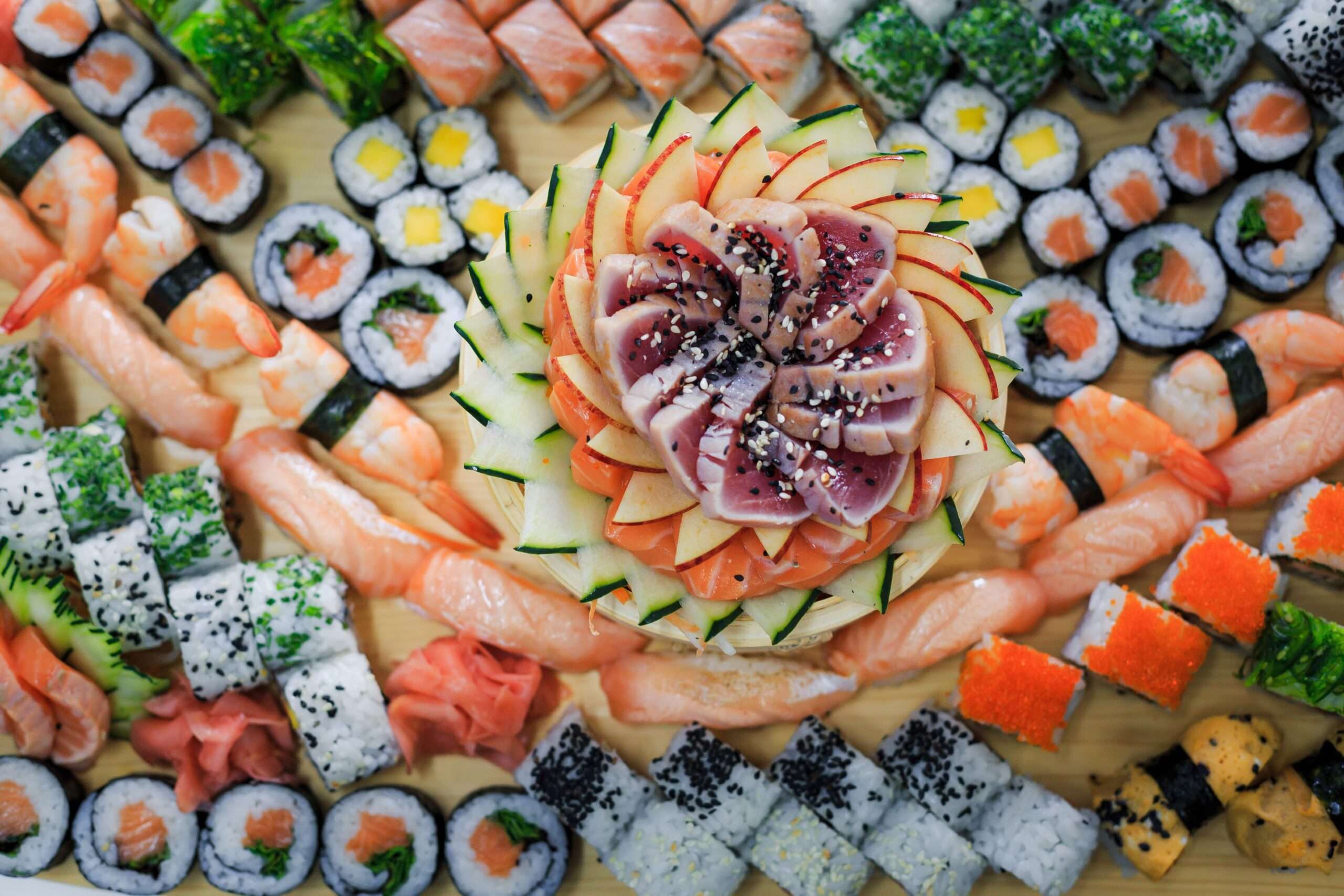 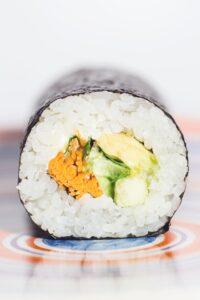 Everyone knows that Sushi is a Japanese food delicacy made up of cooked rice and other ingredients like vegetables, fruits, and seafood.

But what one does not know is that there are varied types of Sushi rolls available worldwide and has numerous health benefits associated with them.

Nigirizushi or Nigiri sushi is one of the most common and traditional types of Sushi found worldwide. The meaning of the word nigiri is itself ‘hand-pressed,’ referring to how this type of sushi is made.

In general, Nigiri is a type of pressed sushi served in a molded rectangle of rice with pieces of fish and shrimps placed on top of it.

Some common types of Nigiri Sushi include ahi(tuna), sake(salmon), and Ebi (shrimp).

Nigiri sushi is usually served in pairs in most Restaurants.

Sashimi is different from other types of Sushi, as it involves only meat and fish ingredients.

Though it may look simple, it takes many years of learning for sushi chefs to master the sashimi cutting technique.

Usually, Appetizer sashimi is served with 9 pieces, and an entrée consists of around 16-20 pieces though it may vary according to the restaurant.

Sashimi also has a higher calorie count than compared to Nigiri sushi.

Maki is a type of rolled sushi-where fish, vegetables, and other ingredients are rolled along with rice wrapped neatly with seaweed outside.

Maki sushi is also made available in different versions, such as hosomaki, futomaki, temakizushi, and uramaki. Each version has a unique version of itself and comes in different sizes along with different side dishes.

Uramaki is a similar type of sushi to Maki, except that it is inside out where the seaweed is on the outside and rice on the inside.

Usually called the western-style sushi, Uramaki can pretty much consist of any ingredient.

Dragon roll, Spider Roll, and Rainbow roll are some of the common types of Uramaki sushi.

Temaki is a type of sushi that is cone-shaped. What sets Temaki apart from other sushi types like maki and uramaki is that they are rolled with a bamboo mat while temaki is rolled with a hand.

Temaki usually contains vegetables, fish eggs, and seafood and is usually topped with pickles and squid.

Only one piece of Temaki is usually served per serving.

Popular Types Of Sushi Around The World

Over the years, sushi has been incorporated into different styles as per individual preferences and choices.

Here is a list of 10 Popular types of Sushi all around the world.

California roll is one of the most delicious and popular types of Sushi all around the world. It contains crab, avocado cucumber, nori seaweed, and sesame seeds.

For many people, California roll is also the first sushi they ever taste.

Ironically, the California roll did not originate in California or Japan either. It was originally found in Canada, but adding avocado to a roll came from California.

Spider roll sushi is not exactly what it sounds like; it usually consists of soft-shell crabs, avocado, cucumber, and sesame seeds.

Inside the spider roll, the crabs are either placed as a whole or chopped into small pieces and scattered all over the rice. Radish, lettuce, Green onions are some of the other ingredients found inside a spider roll.

The rainbow roll is a type of uramaki sushi with rice on the outside. It contains various things, ahi (tuna), which is red in color, salmon, which is orange, yellowtail, which is pink, red snapper in white, and avocado in green. However, it does not contain all the rainbow colors. It is colorful and tastes delicious with a lot of flavors.

Tempura rolls are nothing but deep-fried maki or uramaki rolls and are most commonly found in all sushi serving places.

In general, Tempura is a method of deep-frying fish or vegetables in a very light batter made of water, eggs, and flour.

Shrimp tempura rolls are the most common and popular type of tempura rolls that are sold out there. Some of the other popular ones include dragon rolls, tiger rolls, and crunch rolls.

Spicy tuna is a special type of maki sushi that uses tuna and a spicy sauce. In this type of sushi roll, the tuna is chopped into small pieces and added with the spicy sauce.

Spicy tuna in general consists of rice, nori seaweed, tuna, spicy mayo, and sriracha. The spice in the roll balances the tuna’s sweetness, and the mayo flavor covers its rawness.

Spicy tuna was originally invented in Los Angeles, California, in the 1980s but remained one of the favorites and all-time popular rolls in America.

Dragon roll sushi is different from other sushi types, as it is not a traditional type of sushi found in Japan. It is a type of sushi that was developed and served in American restaurants and hotels.

In general, Dragon roll is an inside-out sushi with rice on the outside and other ingredients on the inside. In dragon rolls, the shrimps and avocado are placed inside with a thin-sliced avocado placed on the top, which when sliced resembles a Dragon and hence the name, Dragon Roll.

There are also other versions of dragon roll where instead of shrimp tempura, grilled eel is used.

The caterpillar sushi roll is a type of delicious sushi roll that resembles a caterpillar. This roll comes along with intricate layers containing rice, nori, eel, and avocado.

Caterpillar roll is a favorite among many people for its artistic and appealing look. It is also usually topped with soy sauce and ginger slices for a more vibrant taste.

Like many other types of sushi, Caterpillar Sushi roll has its roots in the west, where the recipes of traditional sushi were tweaked to add a wonderful blend to its taste.

Considered one of the most classic sushi rolls, the crunchy roll is the easiest to make and can be prepared even at home.

Philly role, like the name suggests, originated from Philadelphia. It is distinct from other sushi types as it is the first sushi invented by one of the world’s first female chef.

Philly roll, which is made up of cheese and salmon, remains one of the popular types of sushi in the united states.

Dynamite roll is a type of sushi developed by western countries. It is termed ‘Dynamite’ because of its high calories and vibrant color combination.

Sushi: Healthy Or Not?

Apart from the fact that sushi is delicious food, the different types of sushi also have numerous health benefits.

Some of them are:

One of the major leading causes of death all around the world is heart-related diseases. Therefore, it is essential to take the utmost care of our heart, which adds to eating sushi.

Sushi comes loaded with nutrients that are good for our heart. Sushi contains fish that are a rich source of omega-3 fatty acids, which are nothing but a form of unsaturated fats that benefits the body in many ways.

They reduce swelling in the body and protects damages blood vessels, thus protecting the heart from strokes and Heart attacks.

It also helps in reducing LDL cholesterol, which makes anyone less likely to suffer from blocked arteries.

2. Great Source Of Carbohydrates And Proteins

Sushi comes packed with plenty of carbohydrates and proteins. The rich and fish in different types of sushi give enough nutrients the body needs. Apart from that, the rice present in sushi is also a rich source of fiber.

One serving of sushi alone contains about 65.9 gm of carbohydrates and can meet about 10% of the total daily fiber recommendation of the body.

Sushi contains Nori, a type of seaweed containing about 43mcg of iodine, which is about 1/3rd of the total recommended daily iodine intake of the body.

Thus, along with many other health benefits, sushi also plays a major role in preventing hormone imbalance and optimizing the body’s metabolic activities.

4. Serves As An Immunity booster

Sushi is not all about fish. It also contains many other ingredients rich in vitamins, calcium, magnesium, iron, zinc, and phosphorous.

In general, it aids in the overall efficient functioning of the body right from good heart health, organ health, immunity-boosting, and so much more.

Sushi, which contains rice and nori seaweed, is a rich protein and carbohydrates source and aids in muscle growth and repair.

To read more about different types of sushi, click here.

WATCH THE VIDEO: THE MOST COMMON TYPES OF SUSHI EXPLAINED

For any food lover, sushi is unmissable. So make sure you don’t miss out on these amazing types of sushi next time!

A Useful Guide To The Early Signs Of Glaucoma